Long Fist - No Longer in Existence

20-year old half-ogre Sentinel whose hometown was ravaged by a band of ogre barbarians 20 years ago. The half-human spawn of these invaders killed their mothers in birth, prompting the townspeople to quarantine them, starting a slum village on the outskirts where the children were kept and raised. Some of the more spiritually-minded folk took pity on them and fed and taught them until a race riot broke out and one of the human townsfolk was killed by an upstart teenager half-ogre. An all out massacre began and Long Fist found himself cornered in the face of an enraged mob. Concentrating his half-crazed desperation on seeking help, a celestial hyena (Hyaeliotrope) appeared by his side and fought off the men, giving Long Fist time to escape. Since that night, Long Fist has been searching for his spiritual companion again, seeking comfort and a home in the world. His travels brought him to the Bronzewood Lodge community for a short time until they were attacked by the Lizardfolk. Afterwards he and Fury lived together in the wilderness before her capture, and he joined the party on 22 Patchwall CY 595, after watching Fury run in and out of the Old Observatory during the party’s battle with Filge and his undead minions.

Not long after joining the party, Long Fist was killed by worshippers of Hextor in an underground temple in the Dourstone Mine. He was raised with a Staff of Life and returned to Oerth by Riddle. Long Fist returned with a new found faith in Heironeous and a strong belief in the Heironean dogma:

UPDATE:
Given the opportunity, Long Fist decided to erase his existence from the universe, hoping to give his friends an edge in the final stages of the campaign. His sacrifice was noticed by Pelor, who rescued his soul, and placed it in a new form: Long Claw, the Golden Griffon of Pelor.

Long Fist - No Longer in Existence 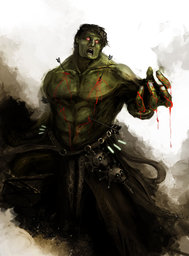